Sexiled: My Sexist Party Leader Kicked Me Out, So I Teamed Up With a Mythical Sorceress! Review 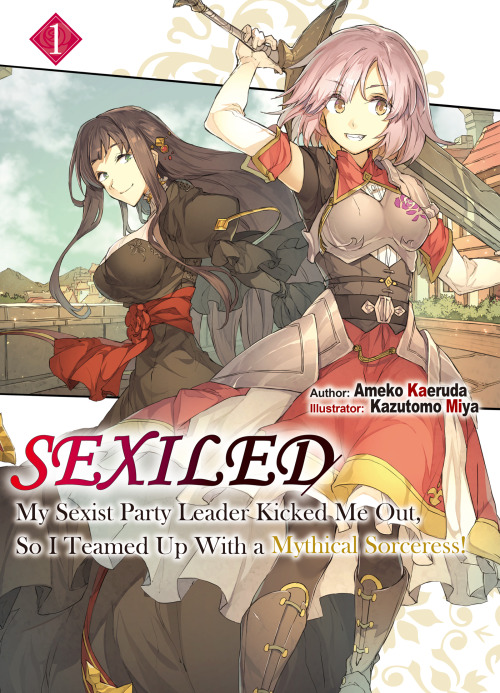 So, what can I say about Sexiled that i haven't said before...

huh so i actually didn't speak about it as much as i assumed.

the book synopsis (per amazon) is:

Tanya Artemiciov is a talented Mage-class adventurer who just got kicked out of her party by a sexist scumbag. So what's a girl to do? Go to the wasteland and blow stuff up of course! One small problem though: she inadvertently frees a mythical Sorceress named Laplace who was sealed away for the past 300 years...

Surprise! Turns out this so-called “wicked” Sorceress is actually pretty cool. Laplace wants to start a party of her own, Tanya wants revenge, and the solution is obvious: team up. It's time to kick ass, kiss girls, and dismantle the patriarchy!

this was the book i ended up falling into bookwalker hell for and i'll keep it dear to my heart.

i found the writing good, the main cast amazing, and the love and care between the two main leads just <3

if you like soft lesbian love stories where the gals stick it to the patriarchy then you'll definitely enjoy Sexiled!

until recently, i hadn't read a lot of fantasy stories that centered on female protagonists (off the top of my head, the only ones i can think of are mahou shoujo manga and his dark materials. possibly because i was generally more into scifi but even that didn't have a huge # of female protags tbh) so honestly Sexiled was a great change of pace.

i picked it up specifically because i heard about the circumstances it was written about – the TMU (and other Japanese medical schools) scandal over purposefully changing students test scores to make female applicants fail. it puts a jrpg fantasy spin to it but it worked out really well. it also had interesting things to say about the “not like other girls” sort of mindset.

the series currently clocks out at 2 volumes but volume 1 is self-contained enough that you won't be overly upset if you end it there although volume 2 definitely expands on the cast and the world building which i definitely would not say no to!

Ameko Kaeruda-sensei has wrote two other stories that are now availabe in english: A Lily Blooms in Another World (which i've read but felt rather meh about overall but that will be it's own review which i'll link when i get to it) and Dragon Daddy Diaries (which looks like will be a series. I haven't even picked that one up yet so i can't say anything)

available digitally in several webstores including Kindle (where it's 6.99) and Book Walker (where' it's 7.22). idk if kindle has previews but book walker does so that might be a good idea if you're on the fence about purchasing (get the preview on book walker and unless you're like me and have a lot of points, pick it up somewhere else where it might be less expensive)